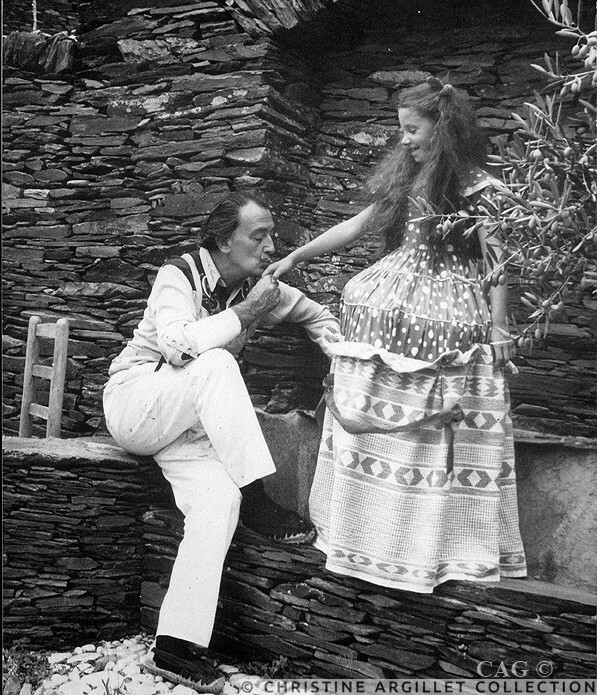 Christine Argillet is a remarkable person. She is the curator and caretaker of the Argillet Collection, the most authenticated collection of Salvador Dali's work throughout his career. She is the daughter of Pierre Argillet, Dali’s publisher, collaborator, and longtime friend with whom Dali debated artistic ideals, participated in the Surrealist community, and developed the artworks found in the Argillet Collection. And she is one of the few people who can say that they personally knew Salvador Dali.

Growing up, Christine and her father would spend her childhood summers living by Dali in Spain as Dali and Pierre collaborated on their artistic projects. Christine is full of stories from these years, which she will share during her appearances at Michael Murphy Gallery as part of the “Salvador Dali: The Argillet Collection” exhibit. Learn more on our event page here.

In the meantime, enjoy this preview of just a couple of memories from Christine Argillet’s surreal childhood.

“As we were at Salvador Dali’s house in Spain, visitors such as Elvis Presley or Walt Disney would temporarily interrupt the tranquility of the place and add to the surreal atmosphere. When extravagant visitors would leave, Dali would right away resume his steady routine. Most days, Dali was dressed in a very simple manner, wearing shorts, an embroidered shirt and Catalan sandals. He would whistle as he was shaping strange objects and painting for long hours in his fisherman’s house.


One day when I was about 8 years old, I had been dressed as the Infante of Velasquez for a costume party. When Dali saw me, he tenderly nicknamed me “The Little Infante.” He kept calling me by that name until I was in my 20s. My Velasquez costume really amused him, and gave him an idea. Dali told me to go in his room and look for eggs wrapped in multicolored papers. As I scurried back with the eggs, Dali instructed me to take them to the beach. Once there, I was to throw these eggs behind the fisherman’s feet. I went ahead to the beach not fully understanding the reason for this odd request. To my surprise these eggs were firecrackers, intended for Saint John’s day. They made a deafening din when I threw them. I rushed back to Dali’s house, entangled in my Infanta dress, chased by angry fishermen... When I arrived, Dali had a mischievous look…

Those magical summers at Port Lligat continued until 1982. Dali and I would play with multiple focus glasses while posing for pictures. Dali would also experiment with tools he invented, putting sea urchins in cubes at the bottom of the pool so that adventurous visitors no longer jumped there. We would sniff at herbs harvested in the morning from the nearby hills. These herbs sparked extraordinary dreams when placed on the bedside table at night. It was a wonderful and simple world that enchanted me.

I had the extraordinary opportunity to not only grow up with Dali, but to also see the master work. Dali would use brushes with one bristle to create microscopic details, or propel paint on his canvas with a gun, all while discussing the symbolism of paintings and their composition with the golden ratio. Dali would give titles to his works with sentences so complicated that no one could understand… The extraordinary was the daily routine. I am often asked if this particular relationship has influenced me in any way. I would say that Dali’s great sense of freedom, humor, and elegance have strongly left an impression in my every-day life.

The artist often stated: ‘Have no fear of perfection - you’ll never reach it.’

There was in Dali’s mind a strong respect for the highest quality craft and at the same time, a true sense of humility for the path to undergo.”